Along my street, the sycamores are shedding. Great scrolls of bark pile in drifts around each trunk’s base. The new “skin” is a tender green. It’s like the trees have hit a sudden growth spurt.

Seeing this always makes me wonder what I myself need to release in order to grow. 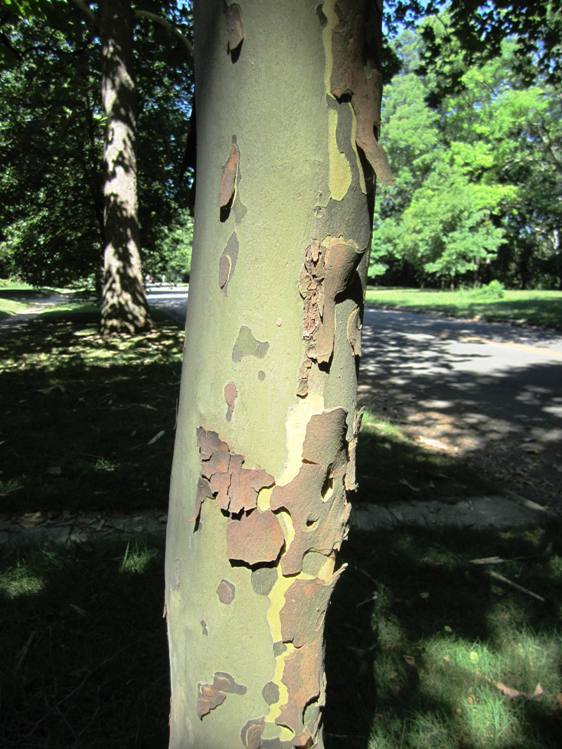 Sycamore in process of shedding

Lately I’ve been thinking about the concept of emergence, introduced to me by an Ohio group called Simply Living. Emergence happens when networks form around a common vision, allowing powerful social change movements to arise seemingly overnight. Witness the local food movement.

The term also appears in Marjorie Kelly’s book Owning Our Future: The Emerging Ownership Revolution. She contrasts the phenomenon with top-down policies imposed on a community. Instead, change emerges organically at the local level, rooted in community need.

Once again, it’s trusting the power of smallness.

Simply Living notes that emergence requires “staying present with the work at hand, yet paying attention to emerging opportunities.”

It’s a tough thing to discern, in both working groups and in individual endeavors. Clearly we can’t do everything. What to pursue, what to leave aside? Which brings me back to those sycamores.

My own life has taken a few twists of late, leading to surprises and unexpected opportunities—emergence on the microcosmic scale.

I didn’t expect to take on a new cat just now. He appeared on the block, scared and wounded, spatting with the other neighborhood roustabouts. I befriended him, took him for veterinary attention and a certain necessary procedure.

Note the cats playing poker in the “picture window.”

Now Kitley’s fully claimed me—and the little house Judy built for him using (mostly) upcycled materials. He can’t come indoors due to her allergies, so she made him a bachelor pad that’s the envy of the entire Feline Nation, or should be. He lifts my heart, racing up to me to touch noses when I’m puttering outside. He makes me laugh when I’m caught in some bleak mental loop of my own making. And then I’m renewed.

I wouldn’t have thought of keeping him as an outdoor kitty, if not for a friend’s chance comment about home-built cat shelters.

Then there was FoodCon. I was a last minute pinch hitter with foraging and solar cookery tables, which led to a friend recommending me to the organizer of Bluegrass Bioneers. Suddenly I’m a teacher in the “reskilling” portion of the weekend. (Happening Oct. 25-27 in Louisville, KY. Psyched!)

More difficult is the paring away. As I embrace emerging opportunities, I must also release what no longer serves, whether it be plans, possessions, or projects.

I’ve always hated that I can’t do every single project that draws me. “Life constantly reaches out into novelty,” says physicist and systems theorist Fritjof Capra. It also prunes away what is no longer needed. I’m working on allowing space for these twin aspects of growth in my own life.

And you? What’s emerging for you and your community?

6 thoughts on “Releasing and Emerging”