It was an honor to meet Growing Power founder Will Allen last weekend. The urban farming advocate was in town to support the work of his student Linda Proffitt at Peaceful Grounds. (Here’s my earlier post about this inspiring demonstration farm, which is a regional training center for Growing Power.)

This aphorism hangs on the wall at Peaceful Grounds.

The former pro basketball player told me that he learned how to broadcast seed as a child. He can pick up a handful of seed and not drop one of them. He has the muscle memory for broadcasting those seeds, whether arugula or chard or carrots—and all require different release rates. His sharecropper father taught him as a child, and all these years later, he retains the skill.

Now he sows great swaths of salad greens in his Milwaukee farm operations. Calling himself a “crusty old farmer,” he is the embodiment of Growing Power’s stated vision: “to inspire communities to build sustainable food systems that are equitable and ecologically sound, creating a just world, one food-secure community at a time.”

In 25 urban farm sites, on places like brownfields, school property, and land leased from corporations, the organization models how to get this done. The food is distributed through multiple channels, from Community Supported Agriculture accounts to a major distributor, Sysco. “Just another customer” is how he describes the corporation that ships GPI wares all over southeast Wisconsin.

Though the local food movement continues to make strides, there’s still a long way to go. Despite all the options—the CSAs, the farm stands, the farmers markets, the small mom and pop stores stocking local fare—Allen says up to 99 percent of the food eaten in major cities comes from 1500 miles away. “The vast majority of people will shop square,” he says, referring to big box stores.

Only $13 million of the U.S. food sector is generated by eco-agriculture—about the equivalent of three McDonalds. Growing Power represents 20 percent of that share. To fully transform the food system would require 50 million people to start growing food in their own yards, he says.

Turning the ship around has been the iconic Allen’s life work for the past 21 years.

He envisions for-profit businesses taking up the charge of urban food security, with nonprofits assuming a training and organizing role.

In his own organization, the people responsible for growing the food are extremely efficient, and training happens as a separate program. That’s a critical point, because farming isn’t easy. Efficiency is the name of the game. 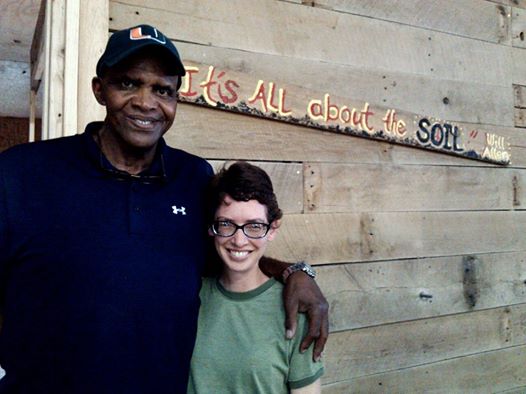 That’s me on the right.

More of my conversation with Will Allen can be found in today’s Nuvo article.