I first heard about Healthy Hoosier Oils when shopping at my food coop, Pogue’s Run Grocer. As a local food enthusiast, I was thrilled to find out that there was a new local alternative for culinary oils. I didn’t know much about how the product was made, but after I took home my first bottle of sunflower oil, I knew it was delicious. Seriously flavorful.

Once you’ve tried it, you will crave its buttery flavor.

I ended up buying bottle after bottle of sunflower oil as we drizzled it on our salads all through spring and summer. And popcorn popped in the stuff is amazing. It’s great for stir-frying too. Then there’s canola oil, which has a more neutral flavor and a higher smoke point.

Eventually I suggested to my Farm Indiana editor that we do a story on the Boyer farm in Converse, Indiana. That’s where the seed crops are raised and turned into this fantastic staple of my dinner table.

Yes, this is the amazingly fortunate position I find myself in at this stage of my life: I get hooked on a particular foodstuff, and get to go visit with the folks responsible for it. I write a story about them and collect a (smallish) paycheck.

I met Craig Boyer, the 81-year-old patriarch of a family that manages to stay tightknit and geographically close in an age where that is rare. (All of his and wife Nancy’s children, grandchildren, and great-grandchildren live within just a few miles of where the above photo was taken.) 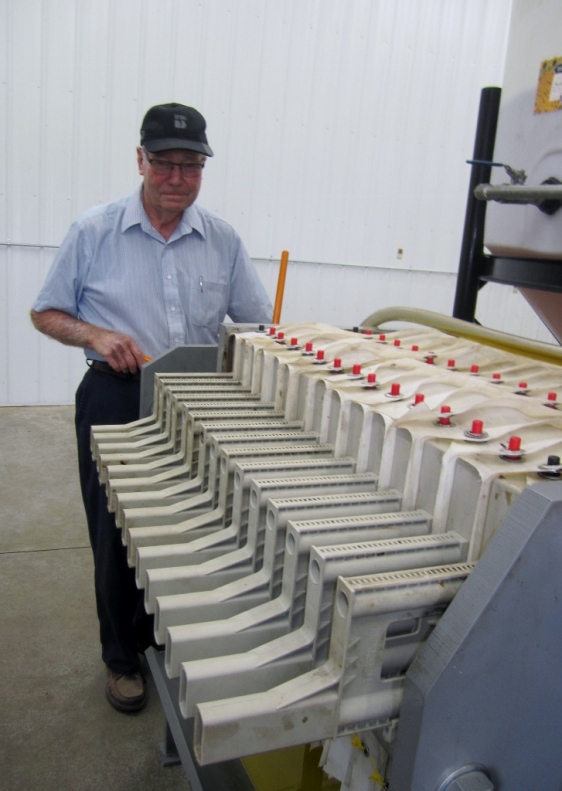 Craig Boyer with a section of the filtration system for the culinary oils.

The land has been in the Boyer family since 1848, farmed for six generations and counting. The culinary oil enterprise is fairly recent, and arose partly out of Craig’s health crisis. He had to semi-retire after a major cardiac event, and he was supposed to watch his diet. His sons Mark and John experimented with converting their biodiesel operation into culinary oil production, in part because of the market—but also because their dad loved his fried foods.

I was pleased to hear that the oils are free of solvents and additives. I actually was a bit clueless about how conventional oils are extracted (through a nasty-sounding process involving hexane and high heat). Healthy Hoosier Oils go through a cold press.

The oil crops themselves grow in a minimally-tilled row-crop setup, in rotation with the corn, soybeans, and wheat that the Boyers also raise. “We use zero chemicals,” Mark told me, speaking of the canola and sunflowers. I asked about weed control: “It actually is relatively easy in that both canola and sunflowers eventually will canopy. When they canopy, they cover the ground and protect themselves from invasive weeds to a certain extent.”

Honeybees are key to the Boyers’ strategy too—they partner with a local beekeeper to make sure that honeybees are working their magic on the crops.

Honey from Bastin Honey Bee Farm of Knightstown is sold onsite along with the oils.

I enjoyed my tour of the operation that July day, even the sweltering 1940s-era corn crib (repurposed to store the oil crops). Here’s the writeup for Farm Indiana, if you’d like to read more. Locally, you can find Healthy Hoosier Oils in Kroger stores, Pogue’s Run Grocer,  and other independent grocers.

2 thoughts on “Made of Sunshine”