Recently I spent some blissful days by Crystal Lake in Michigan, thanks to a dear friend’s hospitality. 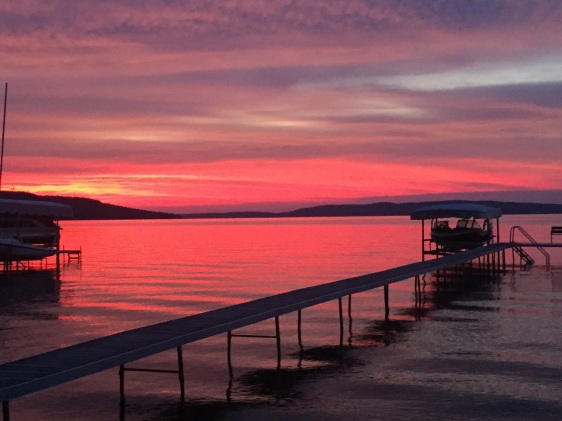 This was the sunset that greeted me on arrival. Photo by Julie Stewart.

The reason for my trip was ostensibly research in nearby Traverse City’s 19th century mental institution. My original plan was to spend just a night or two in the haven of my friend’s company and then head out. (On the way home I wanted to tour a Michigan farm that specializes in teff, on assignment for Acres USA. And since the farm lies halfway between home and Crystal Lake, it made sense to find lodging midway.)

But it turned out that the teff farmers were unavailable during that time, so my grand plan fell through. And I’m so grateful.

I needed those restorative days and nights to rest, integrate, and incubate. After touring the asylum as planned, I turned to my project with a fresh eye. I wrote in stints between riding my friend’s bicycle, lying in the hammock, walking along the lakeside, floating in the crystalline water, and other general deliciousness.

In the mornings I sat at the end of the dock and faced into the wind. The wavelets on the lake and the constant breeze made it feel like I was on a boat, moving steadily forward.

I thought about how we can draw to us exactly what we need, even if it feels like we’re sitting still. If we’re aligned with what wants to be born, it’s less about effort than showing up and paying attention.

Driving home, I saw this truism played out again when an audiobook I was playing refused to work. I finally gave up and turned on the radio, just in time to find a program on NPR that spoke exactly to a dilemma I’d been working out in my story.

Now, this was in a semi-remote part of Michigan, where very few stations were coming through clearly. I marveled that I could hear this piece all the way through to the end as I drove along between the evergreens. The station faded just as the next story began and I came to a well-placed rest area.

When I got back in the car, I tried the audiobook again. You guessed it: This time it worked.

It struck me that this synchronicity was a symptom of alignment, proceeding straight from my placement at the end of that dock, where I had given myself the gift of sitting still.

I forget this all the time. Part of me still believes that I have to make things happen. I was taught to keep on pushing, no matter what. Never mind that time and time again—say in a client session or on a writing jag—I find a larger truth. The “I” that I so cherish steps aside for a bit and lets something bigger take over.

When I came back from Michigan, I longed to sequester myself with my writing. I took over the guest room with its sweet view of the garden out back. 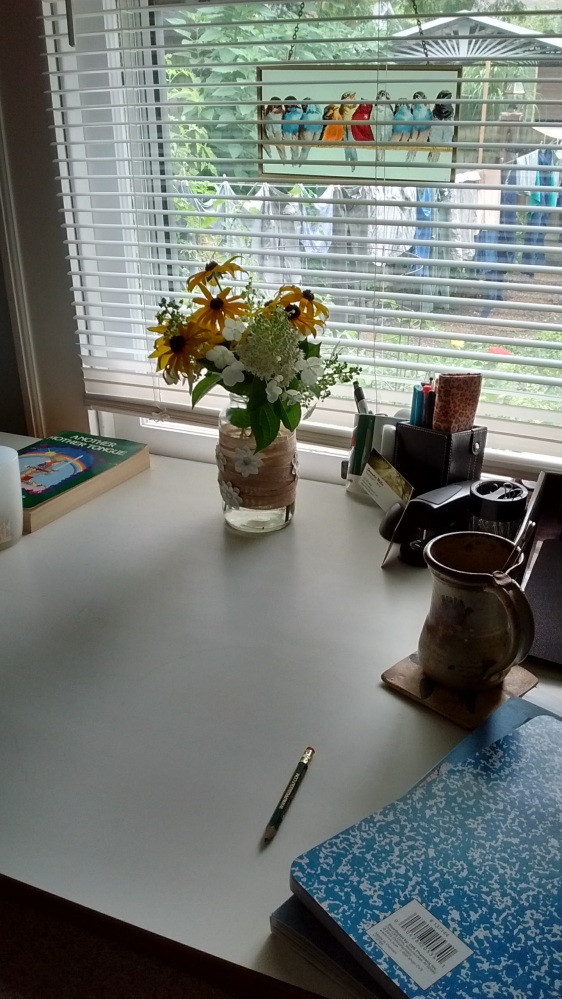 I have been spending some time each day there immersed in my work, it’s true. But I still long for more. As the magic of my little Michigan expedition wore off, the usual obligations and distractions started to intrude. I have found myself overbooked and overstimulated.

Earlier this week I dreamt of coaching a pregnant woman through labor. When I woke, I realized that I am in the midst of a contraction. I have thought of “contraction” as a negative, as in “contracted state” opposite “expanded state”—but I understand now that I need to honor my need to contract. I see that turning inward is critical to the process of labor, which is really about so much more than active pushing. I need to allow a natural rhythm to flow.

And I need to pay attention, so I can be ready for those helpful tidbits that come my way as I appear to be sitting still.

In order to cultivate more quiet in my mind and spirit, I plan to sign off social media for the better part of August. This contraction requires that I evaluate every invitation and activity carefully before saying yes. I might not blog much. But I’ll be back.