Father’s Day. Let me tell you about my dad, if you didn’t know him.

My dad loved all things plant. Out on a walk, he’d look down, the better to identify the plants at his feet. During his social worker years, he spent as much of his off hours as possible outdoors, tending his raspberry beds, vegetable garden, and native plantings. As a retiree he had time to participate in all kinds of projects that fit his passion, and he was never happier.

One of the pleasures of being the daughter of such a man is introducing myself as “Donovan’s daughter” to his many friends and co-conspirators. Recently I interviewed a “FOD” (friend of Dad) for an article I was writing. I knew Dad had done some volunteer work with this organization, Central Indiana Land Trust. At the end of the phone conversation I mentioned Dad’s name.

The response in my earpiece was immediate. Cliff Chapman, the organization’s executive director, said, “Oh, Donovan! I loved Donovan!”

He started to tell me stories. How Dad was the only one who came out for the first volunteer work day at a nature preserve called Oliver’s Woods. With two feet of snow on the ground, Dad and Cliff together tackled the first bush honeysuckle (an invasive plant that kills off native plants). It was “the size of a VW beetle,” Cliff said.

Since then over 1500 volunteers have cleared a dozen acres of bush honeysuckle. They used to have to wield a hedge trimmers just to be able to drive up the lane. Now native plants are starting to flourish there. Though the site is not open to the public yet, it is on its way.

Cliff still remembers that very first cut that started everything off.

He told me another story that is just so Dad:

“One of the things he had me do—it was when he was in home hospice care and I went to see him—he said, ‘Hey there’s this plant I’ve planted, it’s got a whole bunch of seeds, and I’d love to see these seeds go to good use.’ So I got a big old bag and collected the seeds and went back in and showed him, and told him I would scatter them somewhere special.”

Chapman planted the seeds—sea oats—along the White River at Oliver’s Woods. He started another stand of sea oats from plugs under a big tree along the lane. He says he always thinks of my dad when he sees those grasses waving.

“Some people are different than other people,” he told me. “He really cared about those things, like he really wanted those seeds to be planted.”

Here is a clump of sea oats in my yard that (if memory serves) originated from Dad. Sometime soon I hope to visit Oliver’s Woods, but in the meantime I will find him near at hand, and be grateful.

Father’s Day meant a pilgrimage to a few places special to my Dad, who died last year. His handprints are all over this town, but I chose a couple places with personal meaning:

1. Holliday Park, down by the river. Because he used to take the grandkids out into the water with a seine to see what they could catch. Also, he kayaked that river many a time. (Once with me. I was not in the best shape then, and he ended up tying a rope to my kayak and towing me into the wind, all the way back to our put-in place.)

The water is not this muddy and high in my memories of Dad taking the grandkids out. All the rain lately. 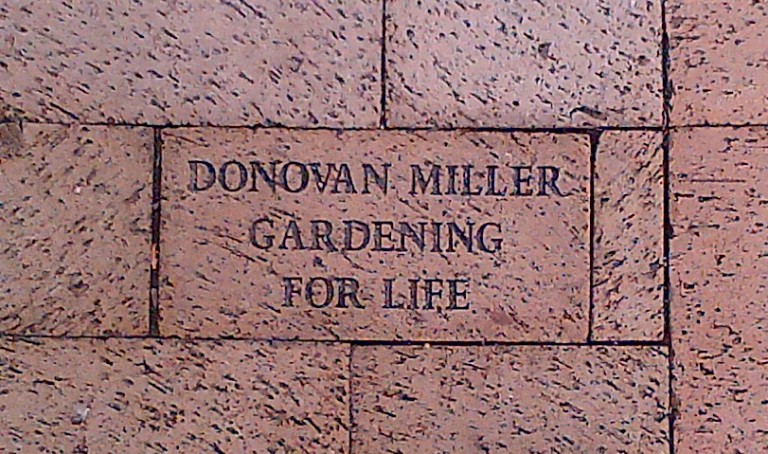 We honored Dad with this walkway brick at Holliday Park Nature Center on his retirement.

3. A pocket park where he and I picked juneberries. Sweet memory. I picked yesterday in his honor.

In truth, Dad is ghosting about the edges of nearly every blog post I write. I see him in the anonymous man in the Keystone Pipeline protest photo—he used to wear that kind of cap, and he marched for important causes. I see him in Keith Johnson, sharing his passion for the natural world.

And I see him in David Forsell, facing death too soon, knowing that what counts is giving back.

A few months before he died, he received the Hoosier Environmental Council ‘s Land Steward of the Year award for his volunteer work (though “work” is a misnomer—he often said, “I’m just having fun.”) A sampling of his fun:

My dad at the kitchen sink in 2010. Strong as an ox. You can’t tell but he’s wearing his favorite “Life is Good” shirt.

Now and then my mail brings evidence of his impact, and it always makes me happy and sad. Two examples:

From Friends of Cold Spring School: The fifth-graders have adopted the prairie he led students in planting around “Mr. Donovan’s Greenhouse.”

From Indiana Native Plant and Wildflower Society: At Dad’s urging, a Gary-area nonprofit working with urban youth applied for funds to visit the Indiana Dunes National Lakeshore—a wild place largely unexplored by these kids (who live less than a mile away!). The funding allowed 40 young people to experience the beauty of this national park.

I remember when he met these folks and encouraged them to seek funding. It was at the Hoosier Environmental Council luncheon where he received the award. He was quite frail by then, but still networking, still advocating for kids and nature. It didn’t matter that the title of INPAWS “Youth Outreach chair” had long since passed to someone else.

Addendum: I forgot to include this recent piece published in the Boiler Journal, describing a day soon after he was diagnosed with terminal cancer.