Recently a group of middle-schoolers from Edna Martin Christian Center‘s teen program came to Rivoli Park Labyrinth to find out what the pocket park is all about. 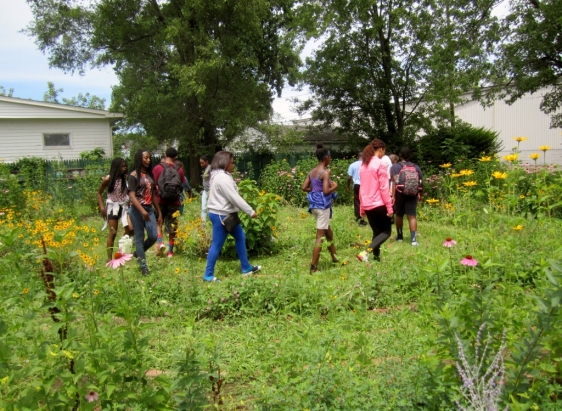 The park’s founder, Lisa Boyles, led the youth on a walk through the labyrinth, which is beautifully ringed by wildflowers this summer. 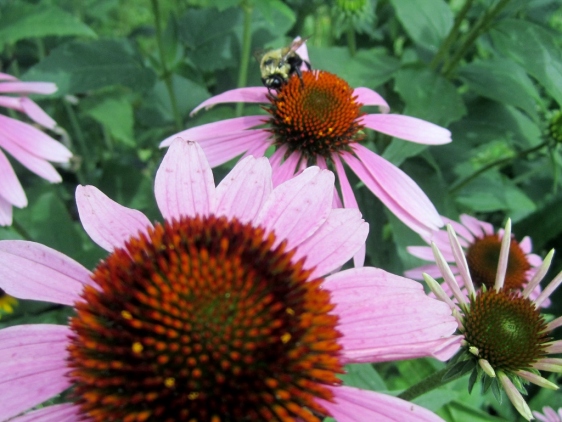 Sharp-eyed kids spotted some of the critters that make the park their home. 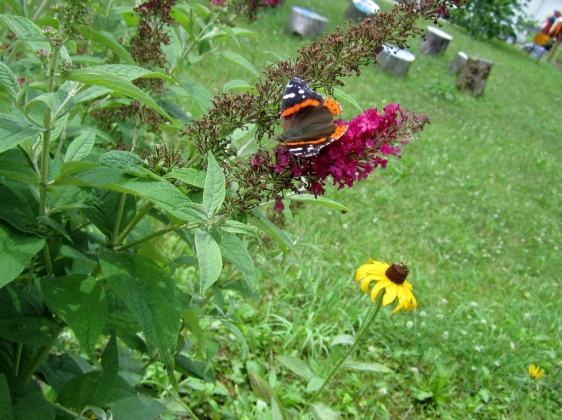 on the butterfly bush

As a certified wildlife habitat, the park provides food, cover, water, and nesting places for creeping and flying insects, toads, birds, and small mammals–and it is managed with sustainable gardening practices that are wildlife-friendly. (Lisa recently saw a falcon with a mouse in its talons, high in one of the trees.)

View from the butterfly bush

After the walk we talked about why it’s so important to support pollinators … without which it would be difficult to find actual food. When one of the boys said something about licking a flower, we picked red clover petals so everyone could try a sip of nectar. Tasty!

Soon the park will be designated a Monarch Waystation with the addition of milkweed, which monarch caterpillars eat. The kids got to sow milkweed seeds in small pots to take home and start their own monarch-friendly habitats.

Each teen also went home with a kit to make a butterfly feeder and instructions to make more nectar (1 part sugar to 1 part water, heated until sugar dissolves, then cooled). 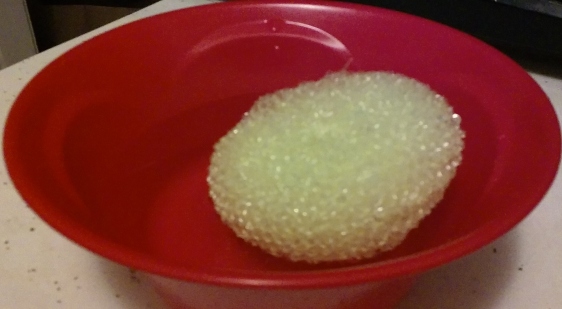 Lisa notes that you can also attract butterflies with fruit. Butterflies are reported to love oranges, watermelons, mangoes, kiwis and apples. Fruit slices can be put on a plate with some water, or they can also be added to the sugar water feeders for added variety for the butterflies.

Pollination takes many forms. Insects pollinate flowers, while a woman like Lisa pollinates young lives by sharing a quiet space in the middle of the city’s hubbub.

A contemplative moment in the center of the labyrinth

All are welcome to explore Rivoli Park Labyrinth’s beauty, spread a blanket for a picnic, or walk the labyrinth anytime between dawn and dusk.

First in a series on education.
It’s been a long time since I was in school, but recent encounters started me thinking about those days again. A few weeks ago I spent an afternoon with a homeschooling cooperative, and last week I joined KI EcoCenter’s discussion on urban education. Both groups inspire me by demonstrating alternative ways of educating youth. I plan to devote an upcoming blog post to each.

Though I know many fine teachers, it does seem to me that something is fundamentally broken in the traditional school model.

Back in the day, I was a mess socially, but quite good at getting the grade. I clearly remember telling my church youth leader at the glib age of 17, “I usually just study for the test and then forget everything right away. It’s easy to get an A.”

His face turned mournful, and he said, “So the system’s got you beat.”

I zoned out on whatever he said next. I was excelling in school, easily maintaining my position at the top of my class—ever since I figured out that daydreaming was best done outside the classroom. No one had ever criticized my methods before.

Straight A’s aside, I didn’t integrate much of what I learned, despite some stellar teachers. School was about checking boxes. Only in an occasional literature class would I feel truly engaged and energized. Most of the time (so it seems now) I was half asleep.

Recently I read a man quoted as saying that school taught him to work very hard at things that don’t matter. He said it was great preparation for life in the workforce—but not really for life.

This was my path: doing what the adults said, getting things done on time, but rarely connecting to the material in any real way.

And I had years of box-checking ahead of me—because much of my working life turned out to be School 2.0. I was free in my off hours to pursue my dreams, but my workaday world belonged to someone else.

I’ve been done with that world for years now, ever since health issues mercifully sidelined me from my corporate job. (Incidentally: doing much better these days.)

I gave away so much of myself in those decades I spent plodding through life in service of someone else’s objectives. Now I look at corporations from the outside and grieve the creative energy locked up in their gears. I look at the classrooms of today, so focused on test scores, and mourn each lost spark.

How much creative thinking is crushed under the boot of the educational system? How much innovation is chewed up in corporations?

Nowadays we need the brilliance of every single mind we’ve got. What’s facing us is nothing less than global collapse. We can’t afford to have anyone zone out.

So why can’t we do this differently? Could we give our youth real-world problems to address, and expect them to show us their best work, not for a test score, but for the sake of our shared future?

The times demand it.

Next: KI EcoCenter, developing tools for the new paradigm.