Way back in 1979, disparate groups in the Boston neighborhood of Jamaica Plain rallied to protest an eight-lane highway extension that would have cut right through the community. The successful campaign made Jamaica Plain the first place in the entire country to stop such an “improvement.”

Since then, every first Saturday in May, the community has come together at Southwest Corridor Park, the location of the thwarted highway, for the Wake Up the Earth Festival and Parade. The event—happening this Saturday—celebrates what’s possible when people of many traditions, cultures, ages, and beliefs unite.

Spontaneous Celebrations organizes the Wake Up the Earth Festival and Parade every year, but the community makes it happen.

Organized by Jamaica Plain’s arts and cultural center Spontaneous Celebrations, the May Day celebration is based on English agrarian traditions. The phrase “Wake Up the Earth” originates from ancient beliefs about rousing the earth to ensure a good harvest.

Spontaneous Celebrations’ program director Mark Pelletier described the opening festivities like this: Two processions form before the festival starts, a dual parade symbolizing bringing the two sides of the tracks together. After winding through the streets—separate colorful processions of stilt walkers, giant puppets, musical ensembles, and revelers of all ages—the parade converges at high noon at an intersection at the top of a hill. Everyone marches down toward the park together.

Revelers in the Wake Up the Earth Parade

There paraders gather in a large circle, and the musicians find a mutual rhythm. The drummers sort out which beat to follow “and it rages along nicely,” Mark told me, “and then there’s everybody standing there facing one another.” I like to picture the various cultural groups in the urban neighborhood all decked out, everyone grinning at each other across the circle.

When the circle dissipates, about 10,000 people will partake of a smorgasbord of participatory fun over the next six hours. 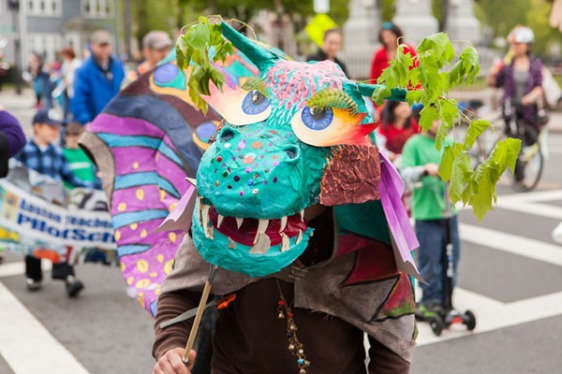 Pageantry and puppetry abound at the Wake Up the Earth Festival

Attendees can play on cardboard slides made from refrigerator boxes, or take part in the all-day drum circle. There’s a “wake up the body” area where people of all ages and shapes practice yoga. There’s an enchanted puppet forest, an amphitheatre with “homegrown circus stuff,” and of course music from every corner (seven stages!). Some 70 crafts vendors offer strictly handcrafted goods, and 25 food vendors sell cuisine from all over the world.

Every nonprofit in the community has a table at the festival, marrying jubilant celebration to civic engagement. It’s a day that brings just about everybody from Jamaica Plain out in a zany, colorful, spectacular celebration of culture and connectedness.

For Dutch-born Femke Rosenbaum, organizer of the very first Wake Up the Earth, this unleashing of imagination is her vision made manifest. “It was always my dream to involve the community in creating the festivals—not to just show up one day, but really to be the creators of it,” she told me.

Co-creation is a beautiful thing, especially in tough times. How does your community come together in celebration?

2 thoughts on “Wake Up the Earth”