In San Diego I learned about sheep crabs, the largest California spider crab and impressive as can be, with a knobbily bluish shell.

I learned that crustaceans molt several times over their lifespan: backing out of their carapace after first growing a soft new shell. They pull water into the new shell to expand it to allow for growth. It soon hardens and they go on their merry way in this roomier carapace (until it, in turn, becomes too cramped).

I’ve been taken with this image, thinking: What if we, too, could back out of our shells and emerge with a new watery skin? Though extending the metaphor requires a shell to harden, the expansion is what intrigues me.

We have the power to expand beyond what we think is possible. (And maybe we can be different from crustaceans, and choose to retain that soft, wet outer skin, instead of armoring up.)

What if the world, itself, could molt like that? What if it is in the process of molting right now? I use “world” here to mean consciousness, the stories that guide us, the collective agreements we have all upheld.

Can we make way for something that has yet to take its full form but that gives room for all of us to grow into the fullness of who we are?

In that personal and collective growth, we can look clearly at the shell of what is passing away. Perhaps it protected us, for a time. Or some of us anyway—those who have been privileged enough to be considered normative through race, gender, orientation, etc.

But: It’s time. We don’t have to buy into a story that makes no sense anymore.

We don’t have to agree to a dominant (but dying) cultural myth that diminishes someone else to make ME bigger. We don’t have to purchase (literally) the trappings of a culture that relies on what amounts to slave labor and massive inequity. We don’t have to buy into oppression, exploitation, racism, fear, war.

What if we all just walked away from that old defunct thing, just backed on out and moseyed on our happy way with something much softer surrounding us?

It isn’t easy, I’m not saying that—we white people in particular feel safe in our habits, in our business-as-usual. And the sweep of change encounters tremendous resistance in the form of the nation’s leadership (as Michelle Alexander brilliantly writes in her New York Times Op Ed today). But in the immortal words of Arundhati Roy:

“Another world is not only possible, she is on her way. On a quiet day, I can hear her breathing.”

To get quiet enough to feel the newness beckon, that feels crucial. To allow the call of the new to bolster us as we get out from under the old.

For me, this exploration lends itself to a simple inquiry: What can I let go of in this moment? Maybe it’s a breath I’ve been holding, a grip in my eyeballs, a resentment, a knee-jerk defensiveness, a fear of speaking up… or a habitual dissing and dismissing of whatever I need to feel, as emotion washes through me.

Acknowledging, allowing, and melting any rigidity… That is where I want to place my attention this first day of autumn, and in the coming season of letting go.

What about you: How do you conceive of the old constrictive shell, whether for yourself or the world? Can you envision a new, slippery, softer shell? What you would like to fill it with as you create more spaciousness?

In backing out from under the carapace, we join countless others in an expansion that can’t be stopped.

Two quotes from Indian author and activist Arundhati Roy are on my mind tonight. First the disturbing.

“Either way, change will come. It could be bloody, or it could be beautiful. It depends on us.”

I don’t even have to look to the horrifying news out of the Middle East to find us awash in blood. Here in my town, last week two men pulled out guns to shoot each other for the unpardonable crime of bumping each other on the sidewalk.

It seems that people are less and less respectful of life, while the means to do harm are more and more lethal, efficient, and accessible. Where will it end?

“Another world is not only possible, she is on her way. On a quiet day, I can hear her breathing.”

Yes, I hear her too. This is why I make a point, every day, to dwell in quiet. 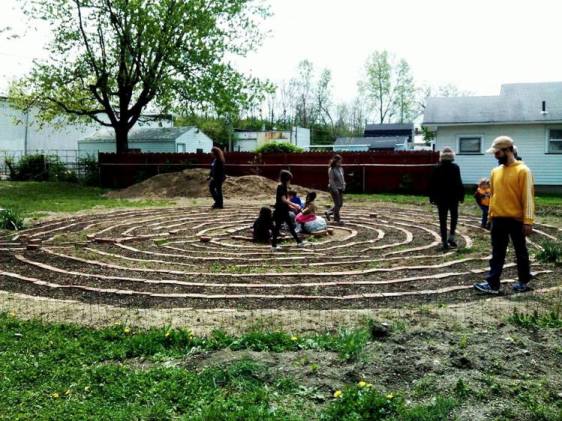 Walking the Labyrinth on World Labyrinth Day in May.

Today I walked the Rivoli Park Labyrinth. I said an invocation before stepping in, and as I wound my way to the center, I imagined transformation happening. The breeze rearranging molecules, my porous body, which is really made of space and light and whirling particles.

I reached the stone at the center, and just as I sat down the sun broke through the clouds. I felt it warm my back.