I am sort of obsessed with all things Hamilton. This refrain from the musical has been running through my head: “Who lives, who dies, who tells your story?”

What kind of country and world do we want to create: One where Black people disproportionately die at the hands of police and from the effects of COVID-19? Where the life expectancy of Black men is consistently shorter than that of white men?

What story will be told when we look back at this time, and by whom? The people whose stories have not been heard or respected no matter how they try to tell them… are demanding to be heard NOW.

The next American revolution, civil rights activist Grace Lee Boggs writes, is about “creating a new society in the places and spaces left vacant by the disintegration of the old.” (More on building a new world in the Resource of the Day below.) We see societal disintegration unfolding in real time now, even as some of us have been pointing to it for a while. 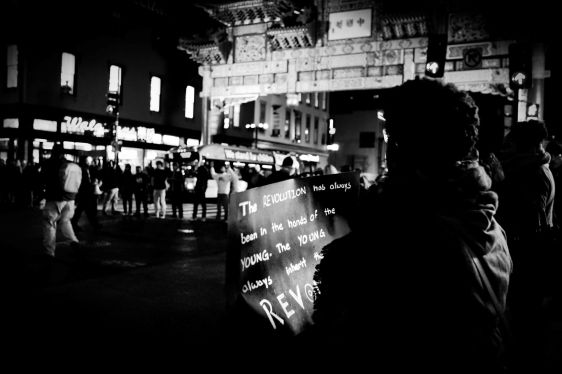 The young people taking to the streets to express their grief and rage? They are the revolutionaries moving this country closer to the”radically different form of living” Boggs writes about. And revolutions are messy, chaotic deals. Violent acts are going to be part of the picture. Though I myself identify with a pacifist tradition, I can’t say anything against any form of protest, especially when the simple nonviolent act of “taking a knee” was so vilified, especially when, year after year, we see little change in the ongoing twin outrages of police brutality and escaping accountability.

When 1619 Project creator Nikole Hannah-Jones talks about Black Americans being the ones perfecting America’s democracy, I get it. The people taking to the streets are working, at great personal peril, to make this country live up to its promise.

Poets, prophets and reformers are all picture-makers—and this ability is the secret of their power and of their achievements. They see what ought to be by the reflection of what is, and endeavor to remove the contradiction.

A major contradiction lives at the heart of our national history: our American ideals of “we the people” and “freedom” began as falsehoods that continue to this day. (Thanks to Hannah-Jones for making this plain.)

I have what I have largely because of white privilege. My parents bought their first home in Indianapolis in the early 1960s, benefiting from lending practices that excluded African American homebuyers. I still benefit from that legacy and a host of other exclusionary policies that preferenced white people over Black and brown people.

And even leaving policy aside, I live in a body that is seen as relatively “standard”—white, thin, currently able-bodied, cisgender, feminine in appearance (can pass for straight). Listening to Black voices tells me that my experience of moving through the world with relative ease (even as a woman, even as a close descendant of the culturally marginalized Amish, even as a lesbian, even as a socially awkward “weird kid,” even as I age) is not one Black people share.

My professional and educational status contribute to this ease as well. I’m about as close to the power structure as you can get without being hetero and male.

And the natural world that I so love, that soothes me? Can be a dangerous place for Black people. It’s heartbreaking to listen to stories of Black nature-lovers who just want to have a little breathing room, but feel unsafe (for good reason) even gassing up a vehicle on the way to some of the places I love. Let alone exploring a nature preserve alone as I sometimes do.

My sense of entitlement has not been plain to me over the course of my life, because it is the water I swim. But it is past time for the last of the blinders to come off.

I can’t change the fact of my privilege, but I can work within it to realign things in some way. Writer Eula Biss calls it the White Debt. I feel especially indebted to the protesters who are trying to turn the tide in this country, and that is why I support reparations, assist the Indy Bail Project, call the mayor, write my city council, contribute to Black-led changemaking orgs, etc. It isn’t enough. And it also isn’t about me. I know I have so much to learn.

But I do believe this quote attributed to a Queensland Aboriginal activists group applies to me:

If you have come here to help me, you are wasting your time. But if you have come because your liberation is bound up with mine, then let us work together.

Gratitude: This is an incredible time to be alive. Every day brings new learning, new chances to contribute.

Tip of the Day: Moment-to-moment choices define a life, and as Grace Lee Boggs says, “You don’t choose the times you live in, but you do choose who you want to be, and you do choose how you want to think.” Choose with heartfelt mindfulness, as you can.

Resource of the Day: Join civil rights attorney/Revolutionary Love founder Valarie Kaur and progressive activist Van Jones for a Dream Corps session on Reimagining and Remaking America Thursday, June 18 (or catch the replay). I have been a fan of Mr. Jones for quite some time and was blown away by Valarie Kaur’s TED talk.