An email came into my inbox a few weeks ago announcing an initiative called City Suppers. The goal of the program—co-sponsored by City Gallery, Harrison Center for the Arts, and Indiana Humanities—was simply to promote neighborliness by way of soup. On a particular night, everyone citywide was encouraged to sign up to host their neighbors for a simple dinner.

Of course, I loved this idea.

As it turned out, my spouse and I had been talking about having a casual neighborhood get-together for a while. City Suppers gave us the impetus to actually do it—not to mention a deadline to get the house clean.

In my neck of the woods, we define “neighbor” rather loosely as “anyone else who lives in Irvington or thereabouts.” So we invited an assortment of folks—some from just around the corner and some from further afield. 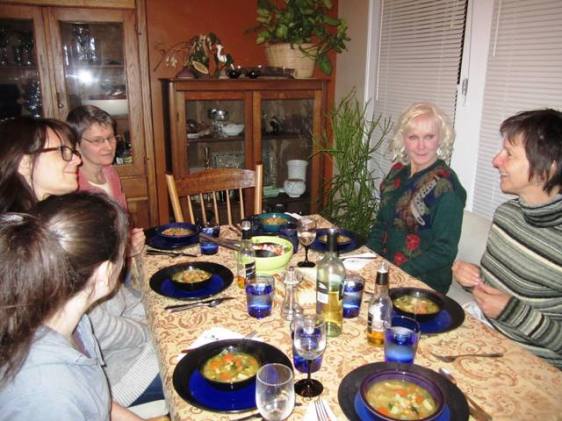 A few of those who gathered around our table

Some had never met each other, and others had known each other a long time. Ages ranged from 1 year old to “I’ll never tell.”

We gathered around our table for a convivial evening. I made minestrone and bought some locally made focaccia and cheese. (Everyone seemed terrifically happy with the soup, which we call “peasant food” at our house—nothing all that fancy, but hearty, economical, and flavorful.) Guests brought wine, salad, and desserts. Truly mouthwatering desserts.

But the tasty, nourishing meal was really just an excuse for conversation and connection.

Life can be a full plate most of the time. So full that it seems hard to find the time for this kind of thing. In our neighborhood we have often socialized around shared projects. It was a novel change of pace to connect over a meal instead of at a meeting or work party.

We enjoyed it so much that we’re making more peasant food tonight and having different neighbors over. We’ll go to Russia instead of Italy, with borscht, rye bread, and beer. (Incidentally I traded with another neighbor—my chili peppers for her beets—for the starring veggie of the borscht. Our version of the “cup of sugar.”)

And bonus: the house is still pretty clean. Not that that matters—I figure if we waited till the perfect time to have people over, it would never happen. So why not just do it?

How about you—what’s your favorite way to connect with your neighbors? Is there something you’d like to initiate with the people living near you, but have been putting off? Why not get it going? It could be just the thing to warm a chilly winter night.

When the sun comes up on these clear mornings, the sky behind the snowcovered trees tints palest tangerine. There’s a beautiful stillness in a frozen world.

Daybreak in the Arctic Vortex

Something about going through an extreme weather event is lovely in its communal nature. For the second day we are snowed in. We can’t drive out of our alley, and any outings on foot are necessarily short because of extreme wind chills.

So we’ve been keeping tabs on the goings-on in our little burg via a Facebook neighbors’ group.

The dangerous cold and deep snow have given us a glimpse of just how neighborly people are in our quirky neighborhood. I have seen many a plea for help go answered, and many an unsolicited offer appear. Just now someone offered to pick up items on her way home from work if anyone is in dire need. Earlier there was a shout-out to “the awesome guy driving a Caterpillar bobcat and helping people dig out their cars from the aftermath of the plows.”

Someone even asked for—and got—advice on how to get her dog to do his business in this brutal weather. I didn’t read the entire thread, but apparently it was a hoot, discussing canine toileting habits in great detail.

People are offering safe havens, rides to emergency rooms and shelters, and space heaters for those whose furnaces are on the blink. They’re doing for each other in large and small ways—taking baked goods over, walking each other through the crises of burst pipes and power outages, helping everyone feel less alone.

I’m sure this behavior is replicated in many places, much of it never posted anywhere. I didn’t post that the fellow on the corner shoveled not just his walk but the neighbor’s between us, and the guy on the alley behind us helped clear our driveway, but they did, and I thank them. 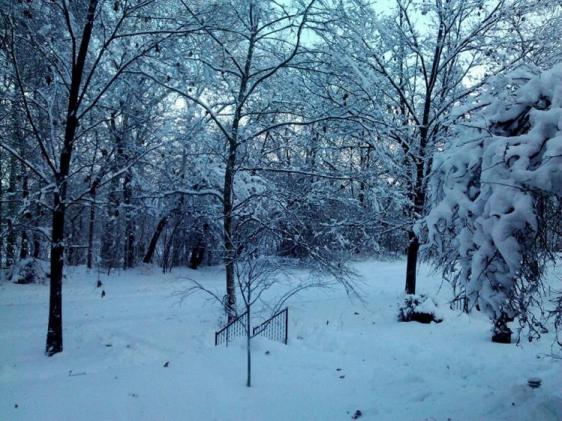 Even though I’m tired of being clenched up from cold, tired of the worry over potentially losing power or the furnace konking out (again), part of me relishes these days, both for the astonishing view out my window and for the weird conviviality online.

Part of me wants to put off snowmelt, with its godawful mud and piles of blackened leftover snow. Part of me never wants this communal experience to end.