The highlight of my Fourth of July? It was not the fireworks nor the pretty paper lanterns floating up and glowing orange against the deepening dusk. No, the high point came during the drive home. 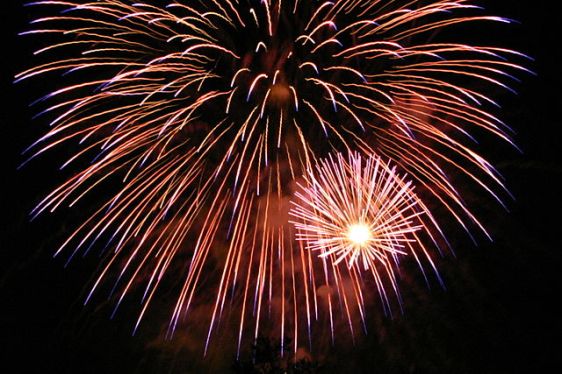 Our downtown viewing spot was a friend’s porch. Through the trees we could see the beautiful fireworks like flowers in the sky. But we left before the show was over, not being a fan of traffic. So we had fireworks in the rearview window while driving down the main east-west artery towards home. Here’s what struck me: the folks who came out all along the street to catch a glimpse of the fireworks.

It moved me to see the good people of eastside Indy taking over parking lots and green lawns, perching on guard rails and idling on off ramps, clustered in doorways and on sidewalks. All along the street, all the way to my neighborhood, they looked the same way. People of all ages and races and walks of life sat on their lawn chairs, blankets, and tailgates with their faces to the downtown skyline on a mild summer evening.

I found it so tender to envision this scene replicated in small towns and municipalities and big cities all over the nation. My countrymen and -women seeing beauty in the sky, children gasping in delight (and dogs ducking in terror), all on the same night. That peaceful slump of bodies—lovers holding each other, parents pushing strollers, children racing around—just as they had on so many Fourth of July nights during my childhood.

I felt a rush of love for everyone celebrating the promise of our young country, and that may be as patriotic as I get.