On the cusp of a “new year,” what shall we plan to create? I have a love-hate relationship with the cheerleadery “new year/new you” notion that’s so rampant. So much promise! So much pressure to do/be better/more this year!

I like the reflections my yoga teacher brought to class this past week. She turned the focus from goals to intentions, and asked how we wanted to be in the new year.

So a better question than “What’s your New Year’s resolution?” might be “How do you want to show up in 2019, for yourself, for your community, for the world?”

Resolutions generally involve some measure of force. We must deny ourselves something, or push ourselves to do something. But if we choose a state of being to guide behavior, positive actions flow naturally from that intention.

Not that we won’t fall short. But we can return to the intention time and again, while resolutions go out to the curb with the crumpled-up wrapping paper.

For me, it’s helpful to choose a word to encapsulate my focus for the year. This year’s theme was alignment. Last year’s, transformation. For 2019, it feels like the word resonance has chosen me.

I’m intending to sink into who I am, resonate my soul’s essence, and bring that resonance to any interaction. (Always holding this gently, with the caveats when I remember, when I can…knowing that this might be more often than I expect.)

“One of the interesting qualities of being human is, by the look of it, we’re the only part of creation that can actually refuse be to be ourselves. And as far as I can see, there’s no other part of the world that can do that. The cloud is the cloud, the mountain is the mountain, the tree is the tree, the hawk is the hawk.” –David Whyte

The poet-philosopher David Whyte nails it when he says humans are the only part of nature capable of refusing to be what we are. We are so adept at pretending to be something other-than-us, we can even come to believe that we are that thing we’re pretending to be.

I’ve been down that route and it doesn’t work well for my constitution. In this second half-century of my life, I’m over fakery.

It’s chancy to show up. To be fully human is to be vulnerable. It means experiencing pain and loss and doing the best I can with it. It means risking exposure and shame. And risking deep joy and connection as well.

When I look up resonance, I find several definitions:

1. The state or quality of being resonant (resounding or echoing, as sounds: the resonant thundering of cannons being fired.)
2. the prolongation of sound by reflection; reverberation.
3. Phonetics: amplification of the range of audibility of any source of speech sounds… (more)
4. Physics: the state of a system in which an abnormally large vibration is produced in response to an external stimulus, occurring when the frequency of the stimulus is the same, or nearly the same, as the natural vibration frequency of the system.

So it’s about sound, speech, words, but also vibration.

I find it interesting that there is a scientific phenomenon (if I understand the physics definition) by which vibration appears to be amplified when frequencies align or nearly align.

Something to try, if you like: Walk into any group of people and resonate your truest being. You may be invisible to some who are not on your wavelength. No matter. Who sees you? Who finds you? You are drawing your people based on your vibration.

You are also, I believe, shifting the overall frequency in subtle ways, making it easier for others to resonate who they are as well. To show up as yourself is a daring act and might tempt others to reveal more of themselves than they would otherwise.

You are reverberating, resounding, perhaps at a frequency beyond the capacity of human ears to hear, but make no mistake: the effect is real.

Here’s to a soul-resonant new year.

Yesterday I outed myself as “woo” to my new colleagues, and you know what? They didn’t bat an eye. One wants to have coffee to learn more. Another wants one of my services.

With Pride Month in full swing, I’m reminded of the closets where I used to hide, in so many ways.

Back in the early 1990s, when I entered the workforce, I felt I needed to hide most of who I was. Most tragically, I pretended my beloved was my roommate. That’s what we did back then (in that town anyway).

I also hid my spiritual bent, my tender underbelly, my writerly aspirations. Interacting that way was like trying to fly with one wing.

What a relief, nearly 30 years later, to find that having a wife instead of a husband is a nonissue for everyone in my ever-widening circle. And to be able to talk about transgender loved ones as well.

And what joy to feel appreciated for all of who I am.

Where are you with that? Do you feel safe to bring all of you to your endeavors? It’s an energizing proposition. One I wouldn’t have expected, at many points in my life.

What would happen if we all came out as … ourselves? If we let our sweet inner weird kids come out and play?

Long ago a counselor told me something about myself that made me cry. He spoke of a Persian proverb that goes something like: “If you have two loaves of bread, you must sell one and buy a flower.” He said it meant that we need both bread for the body, and a flower for the soul.

He said, “You are our flower.”

Which still makes me tear up.

Twenty-four years ago, possibly to the day, I made this drawing in a sketchpad.

The picture started from a doodle. I didn’t know I was drawing an alien and spaceship till they emerged.

I did know that I felt quite alien myself, and had all my life. As I went into 1994 (at 27 years old) I was trying to integrate this understanding of myself. I wrote “Hail Earthlings” as my greeting to the rest of the human race, closed the notebook and moved on.

Pre-social network days—and I’m not even sure I was on the Internet much in 1993—I didn’t realize how many others felt (and feel) this sense of being “other.”

In this connected age, we aliens have started to find each other. We’re getting bolder about showing up in all our freaky glory.

I think of the admonishment some of my religiously-brought-up friends often heard as they headed to school: “Remember who you are.” Meaning, behave yourselves, represent the family and the church, be shining examples of godliness, etc.

Well, now we are remembering who we are for real. And it isn’t about good behavior this time, but about authenticity. 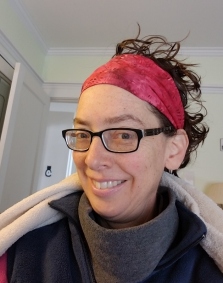 Any other weird kids want to come out and play?

It turns out that being authentic is actually the way to be “godly”—if you believe, as I do, that we are all born with spiritual gifts that yearn to be expressed. The only way to move closer to our Divine nature is to truly be ourselves, to align outward action with the truth of who we are on the inside.

What’s more, that’s the best way to participate in the healing of the world.

What a revelation. What a resolution.

Let’s not close the notebook on our weirdness. No more modulating what we do in a doomed quest to fit in.

“Let your freak flag fly.” That was the guidance given to a friend recently, the same friend I had counseled, “Just do you, and you’ll soar.”

Let that be the one resolution that you keep. Let 2018 be the year of freak-flag-flying and remembering… and healing the world through the authentic expression of our beautiful kaleidoscopic gifts.