After traveling for nearly a month, this homebody is glad to be back to my little haven of domesticity. This time I visited Washington State with a side trip to British Columbia.

If you follow the blog, you know a little bit about my adventures, but here are some more highlights.

In Bellingham I learned about Sustainable Connections’ Think Local First campaign. This ingenious program rewards local businesses for earth-friendly business practices by raising their profile in the community.

We decided to experience this local biz thing for ourselves. 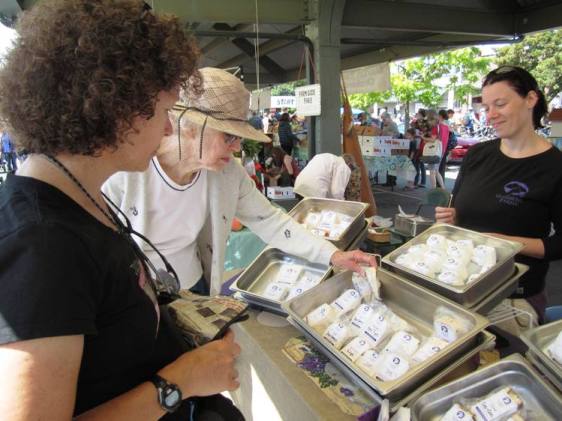 Checking out goat cheese options at the Bellingham Farmers Market (that’s our old friend Laurie in the foreground.)

Craft beer, ice cream made from local berries, a killer bookstore, and a festive Saturday farmers market showed us a bit of the region’s specialties. 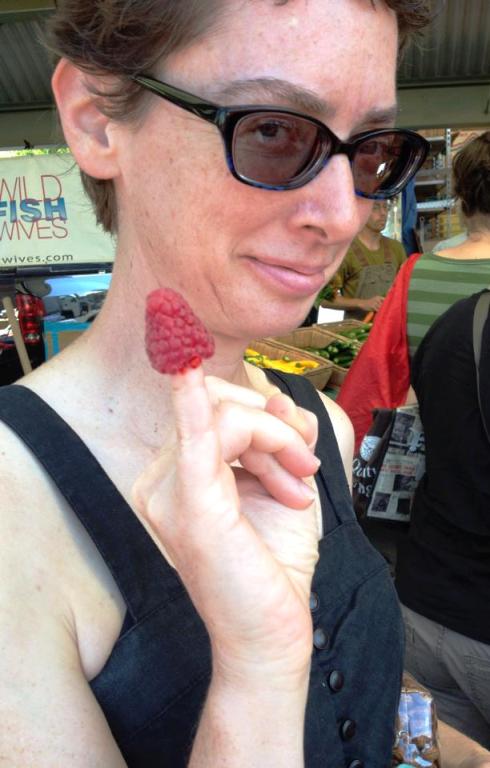 From Bellingham we ventured north to Denman Island in British Columbia for the Mudgirls workshop. 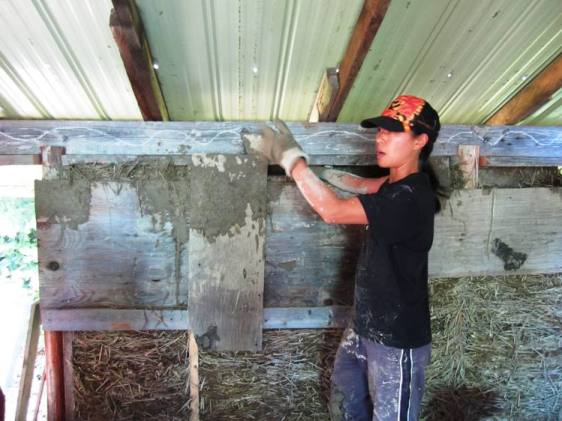 Then it was back to the U.S. for a two-week writing residency at Hypatia-in-the-Woods in Shelton, WA. This experience was a bit different from previous residencies which I shared with other artist types: I was the sole resident of a lovely cottage nested deep in the cedar forest. 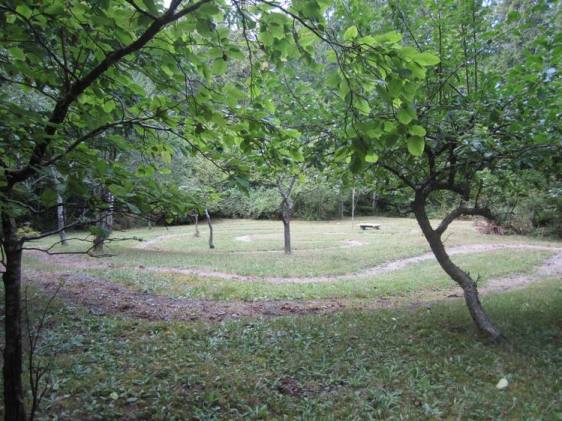 The labyrinth on the grounds, a magical place to commune with deer, birds, trees, and insects

The solitude gave me lots of focused time to write. I also learned how much I value having someone within hollering distance, as I had a few challenging moments in the intense isolation. I was thankful for the board, who kindly made sure I had some conviviality to balance out the quiet. 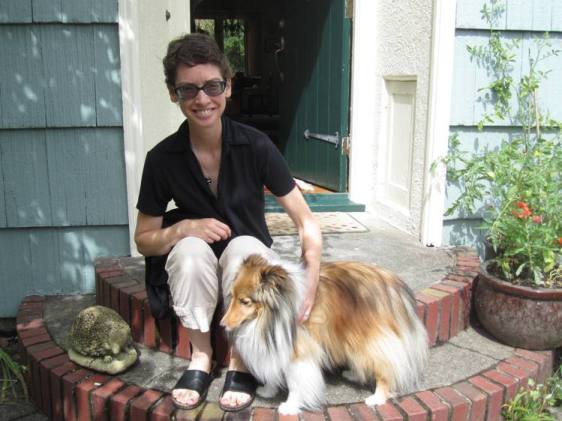 Other people’s dogs, such as the director’s Sheltie, Ceela, helped me deal with the lonesomeness of not having my dog with me.

A high point: connecting with Olympia Mycelial Network, a group I’ve admired from afar. I helped them with an installation of bioluminescent mushroom mycelium, which was a thrill.

We gathered by the cob oven on the Commons at Fertile Ground. After a quick tutorial, we created a path from wood chips inoculated with panellis (bitter oyster) mycelium. The hope is that this path will glow in the dark as the mycelium gets established.

Peter McCoy, who blogged here about starting the Radical Mycology project, walked us newbies through the process for growing mycelium. 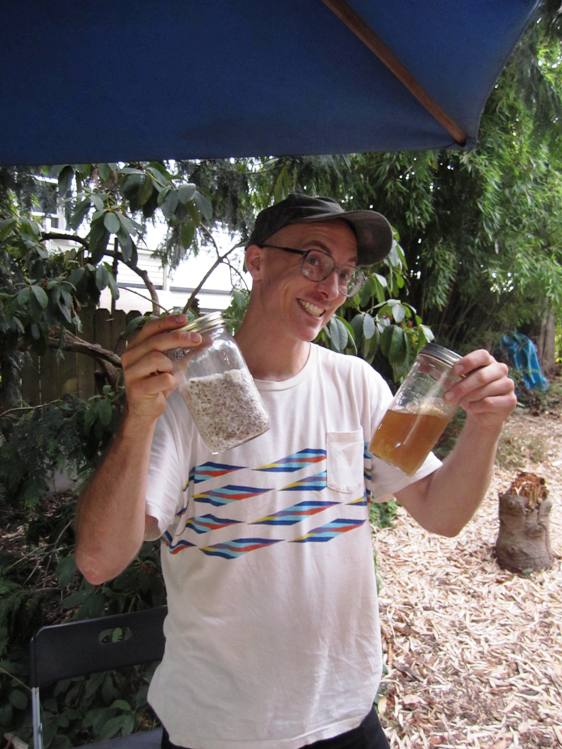 Peter showing me grain spawn and mycelium sugar that he propagated at home. Now I want to try it!

After that inspiring evening, I had to visit Olympia Food Coop, where the group earlier helped install mycelium that consumes petrochemicals.

I feel so lucky to have had the chance to learn from such innovative people and projects. I’m glad to be back to my laundry-hanging, solar-cooking, dog-walking routine though. I have several fun writing assignments coming up that I’ll tell you about later.

Note: Speaking of solar cooking: We’re offering a workshop this Sunday from 2-3pm at Pogue’s Run Grocer on that very topic. RSVP here if you can make it!

I’m always intrigued by people who are able to take the more complicated aspects of modern life into their own hands. Maybe that’s because outside of your basic paring knife and garden trowel, my own hands are pretty fumbly. The realm of natural building just amazes me. 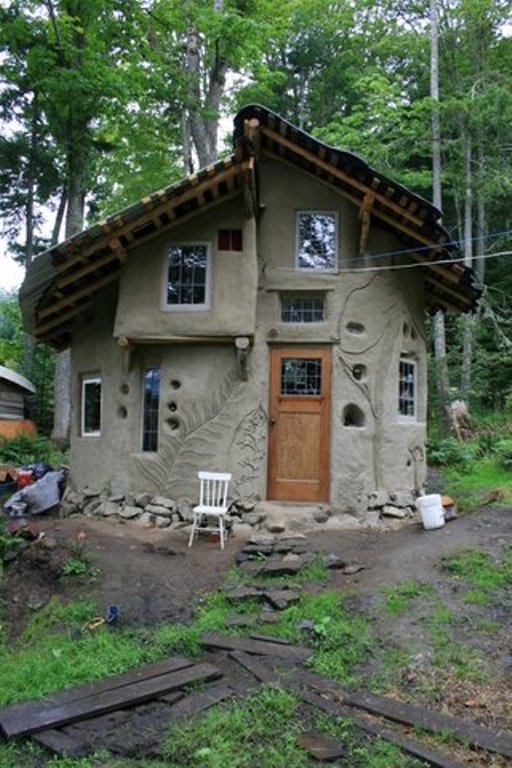 Round cob house built by the Mudgirls

Natural building involves using materials occurring in nature (and sometimes recycled materials) to construct homes and outbuildings. For example, back in Too Many Tons I posted a video featuring a DIY builder from Indiana making bricks from mud. Materials are sourced locally—perhaps clay from a neighbor who’s digging a pond, sand from a nearby excavation, straw from a local farmer.

Recently I discovered a British Columbia-based women’s collective specializing in cob building (using a mix of clay and straw). Meet the Mudgirls. 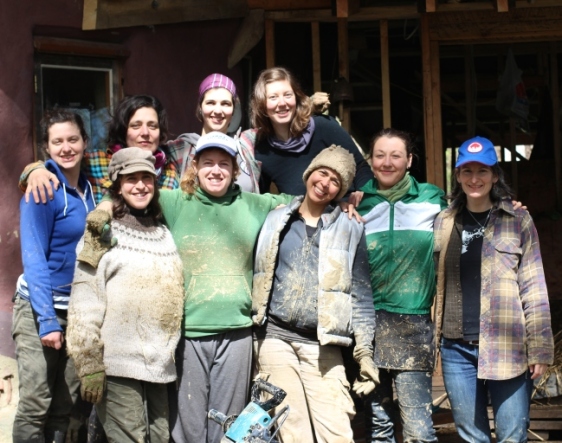 The Mudgirls are a collective of women builders on the west coast of British Columbia, Canada

For the past seven years they’ve worked together as independent builders, doing seasonal work throughout the Vancouver Island area. Though they started with only about 10 days of work in the early years, many now make their main summer income from this work. 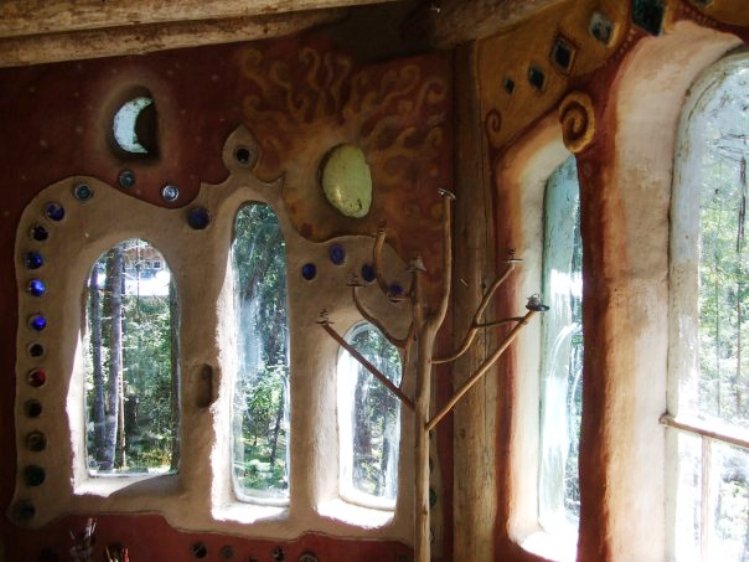 Interior of a Mudgirl-built home.

As a consensus-run group, they are trailblazing in other ways as well, showing a more egalitarian way to operate than the dominant paradigm’s business-as-usual. And they offer workshops at the most affordable rates in North America ($200 or less).

Mudgirl Rose Dickson, one of the founding members, was drawn to the collective because of her outlook as a feminist/environmentalist/artist. From the photos,* it’s clear that the Mudgirls’ work offers a creative outlet. 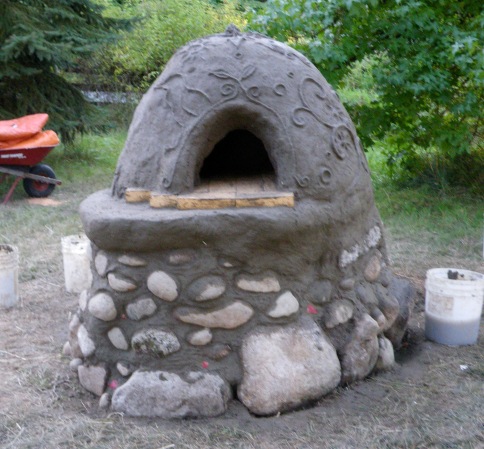 Cob oven made by Mudgirls

And these round structures are built to last, as witnessed by many such homes in England, still standing hundreds of years after their construction.

Not too long ago, a four-ton tree fell on a Mudgirl-built cob house—crashing through a bump-up of windows and earthen plaster and stopping at the cob wall. Rose reports, “No cracks in the wall from impact, and the guy who came to clear it off said a wooden house would have been crushed by the tree.” 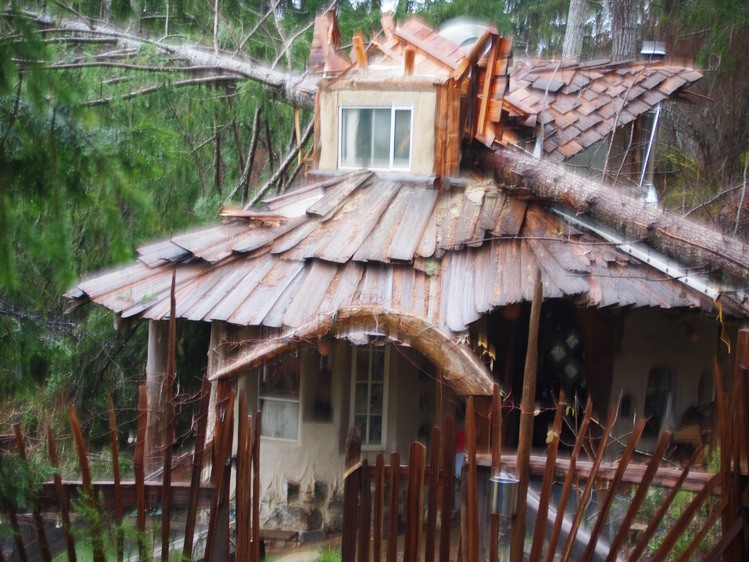 A tree fell on this Mudgirl-built cob home, stopping at the cob wall

Cob building is physically demanding and sometimes uncomfortable work (imagine a chilly spring day when you’re working in cold mud from sunup to sundown). But Rose relishes the chance to be outside, away from a desk, making something with her hands in the company of her dearest friends. 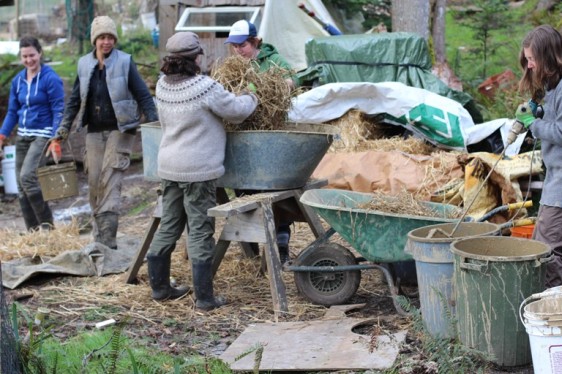 “If the weather’s cold, it can be kind of miserable,” she admits. “But if you’ve got a couple friends there who you’ve known for years and you’re joking and laughing, it makes it. That’s actually one key with natural building is the community. It takes more time, so the labor is a factor. But that’s part of why people do it together.”

This strikes me as the ultimate in do-it-with-others (DIWO). Has anyone out there had experience with communal natural building? I’d love to hear about it.